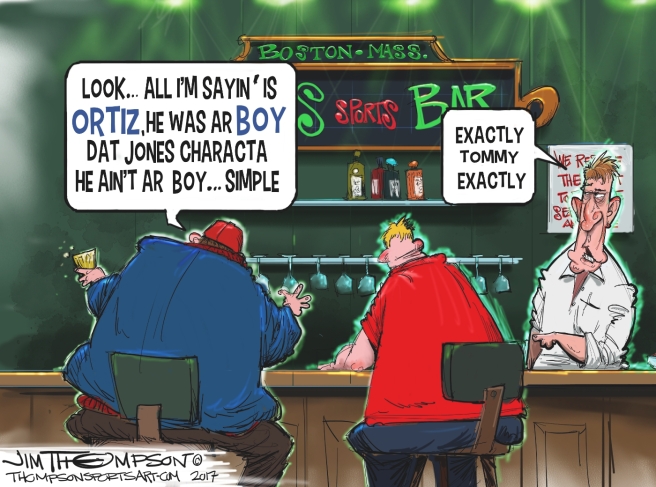 ORIOLES CENTERFIELDER ADAM JONES was subjected to some nasty and racist rants from Red Sox fans recently. That should surprise no one. Boston has been a nasty nest for townie racism for – well for as long as Boston has had beans.

One guy was IDed by the Sox and banned for life. Cool and good riddance. But that isn’t apparently the end of his involvement. Sports talking heads like Steve Mason in LA want the guy’s name released. Why? The result of doing that won’t change him or the people who know him for the most part. There’s little detail on context. Was he drunk, or just stupid? Maybe both? Look, I’m not defending racists or for that matter, Boston – a town I view with contempt. But turning a guy’s life into a living hell by faceless anonymous cowards (who are the most part ball-ess internet trolls)  isn’t a solution. Maybe his friends will step up and change his mind and heart. But outing some miserable blue-collar townie because he barked a racist taunt at a millionaire is not a solution.