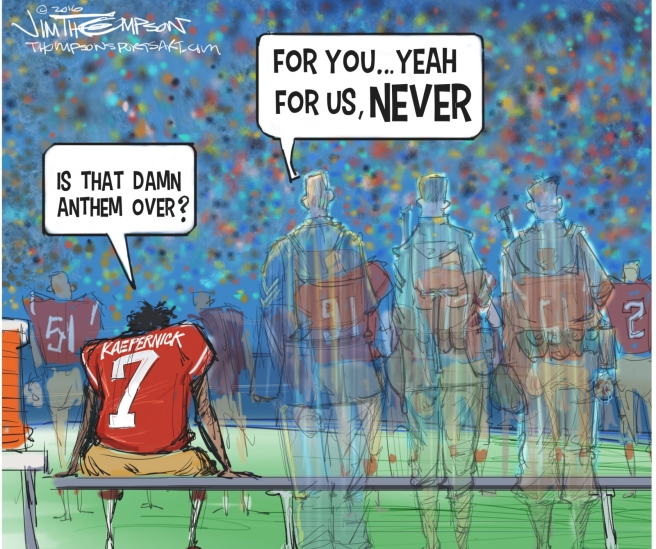 Although the 49ers signed COLIN KAEPERNICK to a massive contract three years ago (61 Million guaranteed) he is on the backside of his career. He has little chance to start for the 49ers and sitting is likely his “position” for the foreseeable future. Maybe he sensed that he was more suited to sit than stand, so he decided to sit for the National Anthem. I’m being simplistic of course – he decided that people of “color” are systemically oppressed so he won’t stand for the National Anthem or stand for the flag. If anyone is curious about what he thinks, just read his twitter feed. He’s bought into all of the conspiracy theories about cop violence and believes that cops are murdering blacks for sport and getting away with it.Several studies have published recently that refute this BLM theory of wholesale murder of blacks by white cops. In fact  according to studies, Black cops are more likely to pull a gun on blacks than white cops. A study by a Black professor found no systemic racial bias by white cops, but those are just inconvenient facts that Kaepernick ignores.

Kaepernick is really fond of some black nationalists and race-baters too. And, he’s re-tweeted garbage about Nat Turner being a hero. Remember Nat Turner? He was a slave in 1835,  who saw visions and according to Turner, God told him to murder whites. So, he murdered whites and not just slavers and slave owners, but anyone with white skin. Turner and his followers slaughtered everyone with white skin including innocent white children. And they murdered them with axes. Why? Becuase they had white skin. Well Kaepernick thinks Nat Turner is a black hero because he was a slave who “broke his bonds”. He ignores the fact that Turner was also a blood-soaked psychopath. That’s the Colin Kaepernick you’ll know from reading his twitter feed.