Although the 49ers signed COLIN KAEPERNICK to a massive contract three years ago (61 Million guaranteed) he is on the backside of his career. He has little chance to start for the 49ers and sitting is likely his “position” for the foreseeable future. Maybe he sensed that he was more suited to sit than stand, so he decided to sit for the National Anthem. I’m being simplistic of course – he decided that people of “color” are systemically oppressed so he won’t stand for the National Anthem or stand for the flag. If anyone is curious about what he thinks, just read his twitter feed. He’s bought into all of the conspiracy theories about cop violence and believes that cops are murdering blacks for sport and getting away with it.Several studies have published recently that refute this BLM theory of wholesale murder of blacks by white cops. In fact  according to studies, Black cops are more likely to pull a gun on blacks than white cops. A study by a Black professor found no systemic racial bias by white cops, but those are just inconvenient facts that Kaepernick ignores.

Kaepernick is really fond of some black nationalists and race-baters too. And, he’s re-tweeted garbage about Nat Turner being a hero. Remember Nat Turner? He was a slave in 1835,  who saw visions and according to Turner, God told him to murder whites. So, he murdered whites and not just slavers and slave owners, but anyone with white skin. Turner and his followers slaughtered everyone with white skin including innocent white children. And they murdered them with axes. Why? Becuase they had white skin. Well Kaepernick thinks Nat Turner is a black hero because he was a slave who “broke his bonds”. He ignores the fact that Turner was also a blood-soaked psychopath. That’s the Colin Kaepernick you’ll know from reading his twitter feed.

REMEMBER WHEN THE USSR would send athletes to the Olympics and they looked like manufactured humanoid robots? The women looked like dudes and the guys looked freakish. I could swear that some of the swimmers had gills. All of them were “pros” in the sense that they were paid by the Commies to perform and win – at all costs.

No one that wasn’t blind doubted that they were juiced. The IOC finally cracked down and got better at testing for PEDs. The Commies medal count fell, then the Commie Empire fell, but that didn’t stop the Russians from cheating. This Summer the Russians were banned from the Rio Olympics for various sports and now the Paralympics have totally banned Russia from the Para-games because they are doping, their handicapped athletes. Wrap your head around that – a country is doping athletes to win at para-games. You have to be a special kind of awful to dope handicapped athletes to beat other handicapped athletes, but that’s Russia, they don’t give a shit about rules, they just want to win…

RYAN LOCHTE was too drunk to consider the ramifications of tearing down a Motor Oil Poster while black-out drunk. He likely can’t spell ramifications, maybe not even black-out – but the aftermath should have been obvious to even an addled Ryan Lochte. If you are a Sponsored Athlete,  get black-out drunk and trash a local gas station but pay for the damages and immediately admit that you used poor judgment, you likely won’t lose your endorsements. If, on the other hand, you trash a local gas station refused to act contrite, lie to your mother then lie to the press, you’re likely going to lose your sugar daddy sponsors; and that’s what has happened to Lochte.

Sponsors, endorse people to make money. If you’re an idiot and act badly you’re going to lose your endorsements. Maybe Lochte should consider A Bail Bondsman perhaps an endorsement deal with a Rehab Center. A business article I read put his endorsement contracts in the 2.5 Million per year category, and they are all leaving – so the poster Lochte tore off that wall will likley cost him 3 – 5 million if not more.

The coverup is often worse than the thing being covered up… Lochte is about to be covered up in Sponsor discontent.

LOS ANGELES WANTS THE OLYMPICS. There are other cities that want the Olympics too. My suggestion for LA. Shrink-Wrap plenty of money put it on an unmarked cargo plane headed to the home offices of the IOC in Lausanne Switzerland… Just sayin — you might be the “winning bid”.

BARRING SOME NASTY J EDGAR HOOVER file on Rams Owner Stan Kroenke, why does Jeff Fisher have a job and continue to hold his job as Rams’ Head Coach. 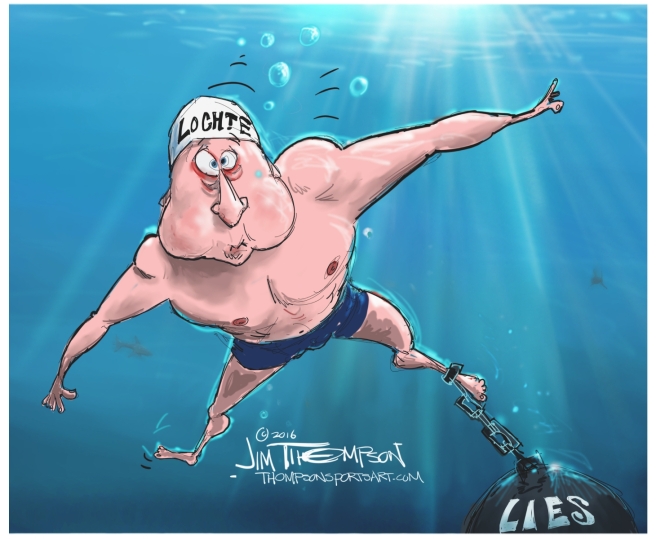 YOU CAN’T GET DUMBER than being a celebrity, pretending your were robbed, then going on National and International TV and repeating the lie. Did Lochte really think that Rio’s Police wouldn’t investigate this… maybe look at video? Ask the Cabby if there was a robbery?  Ryan Lochte might be the dumbest athlete on the planet.

DRAFTED 3RD OVER ALL IN THE NFL DRAFT, JOEY BOSA IS THE LAST GUY HOLDING OUT. Bosa is being unreasonable at foolish because he’s holding out over when he gets guaranteed money and an offset clause that the Chargers are unwilling to budge on – the Chargers are right, on both counts. So Bosa who hasn’t played even a pre-season down of NFL football is acting like he’s irreplaceable. According to some reports, Bosa is willing to accept either the setoff language or the defer the signing bonus but not both.

I’m not much of a fan of NFL ownership, but when you haven’t played a down, and you are not an impact position player like QB – sign your contract and prove yourself. Bosa will make about 30 million guaranteed even if he tanks, so I just don’t have much sympathy for him. I do have sympathy of the 3rd Rounder who has to fight every day for a piece of the pie, and to stay in the league and make a living.

I ADMIT THAT I LOATH HOPE SOLO. She’s a loud-mouthed self-aggrandizing petulant ass. She’s been arrested for beating up a relative and she acts the bully when it suits her.

Team USA lost to Team Sweden in the Semifinals yesterday and it was no surprise to me (and most anyone who follows soccer) that she acted like a self-aggrandizing petulant ass after penalty kicks. She didn’t like the Swedes playing a defensive game so after the loss she called the Swedes cowards. Sweden couldn’t hang with America in an uptempo game so they played a tactically smart defensive game and won in a shoot-out. Smart –  and it got the Swedes a win, but Solo in all her inelegant prose said the better team didn’t win and the Swedes “are all cowards” – all because they didn’t play a game that suited Solo.

I’m a Patriot. I love my country.  And I love watching America beat anyone in the world, but when Solo is on the team and it loses I feel not a whiff of regret — all because Solo is so loathsome. She’s 38 so there little left of Hope Solo in the Net. After she’s replaced I can go back to being a full-throated fan.

MICHAEL PHELPS and other Olympic American Swimmers are “cupping”. It’s an “ancient” Chinese method of drawing blood away from muscles to help muscles heal. I think it’s nonsense, but what do I know, I haven’t won Gold Medals.

What am I certain of? That crazy moms across America are checking Amazon, looking for “cupping” kits so they can start cupping their future Olympians (and their ticket to fame). Oh, its gonna happen – likely already is happening. There is no shortage of nutty helicopter parents out there who will do anything to get their kid on a national stage, and the camera on them in the stands. 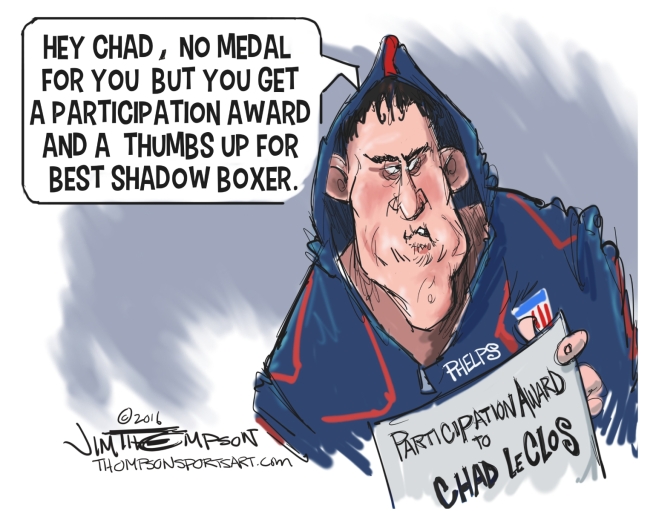 MICHAEL PHELPS was trolled by rival CHAD le CLOS. Le Clos Shadow Boxed in front of Phelps in the Ready Room and did other silly boneheaded things that did nothing but motivate and infuriate Phelps. The “#PHELPSFACE hashtag  was popular – a photo of Phelps looking nasty.  Le Clos continued with the his antics right before the finals, staring at Phelps before they took to the blocks. None of it helped.